State OHV Trail Crew leader Monte Lutterman and his team, based out of the Sulphur Ranger District, wrap up eight straight days of clearing over 540 trees downed on Rampart Trails.

The Rampart Range motorized recreation area is not that far from Denver and not that high in elevation as some of Colorado’s higher elevation, backcountry trails. Yet when almost 10 feet of snow dumped on the area this past winter, it means only one thing to Scott Dollus, USFS Recreation Planner for the South Platte Ranger District: there is going to be a lot of downed trees out there…

Every year, Scott works to have the Rampart Range Motorized Recreation area in the Pike National Forest as one of the first scheduled venues for the State Trails Crew to begin their season of working around the state performing trail clearing, trail maintenance and a variety of other projects. Miles Miller, USFS Recreation Planner for the Sulphur Ranger District, oversees selection, scheduling and budgeting of the State Trails Crew. 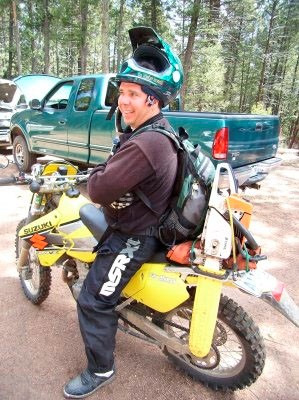 Scott Dollus and his local crew head out to pick up where the State Trail Crew left off.

A sign of things to come for this year was when the crew cleared overn 75 trees on just the 3.4 miles of trail #673 that leads from Flatrocks Campground to the Sprucewood Inn. After eight straight, exhausting days of working on the challenges relating to this year’s heavy snowfall, the crew cleared an estimated 540 trees on a big portion of the trails in the area. Local crews from the South Platte Ranger District and volunteer Trail Work Parties will attempt to finish the balance of trails to be cleared in the area. Among the many projects the teams encountered were dealing with large trees pulled completely out of the ground when they fell, exposing giant root balls that must be moved off the trail, then having to fill the huge holes that are left behind.

Scott reports that with the combined efforts of the State OHV Trail Crew’s assistance for eight days and the ongoing efforts of the local South Platte Ranger District Trail Crew, almost 1000 trees will have been cleared in preparation for opening the gates to this popular riding area, just 45 minutes from Denver.

For more information on the Rampart Range Motorized Management Committee, Inc. and up to date weather and trail conditions, visit: www.rampartrange.org