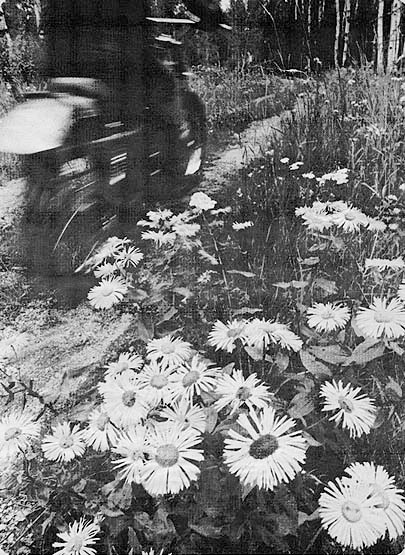 AT FIRST GLANCE it looks like any ordinary country bar. Nestled in the trees along the dusty, winding, gravel road, the rustic log building’s two signs boast of cold beer and 24-hour towing. The most familiar sign is the row of dirty trail bikes parked out front. Riders know the place simply as Sprucewood. 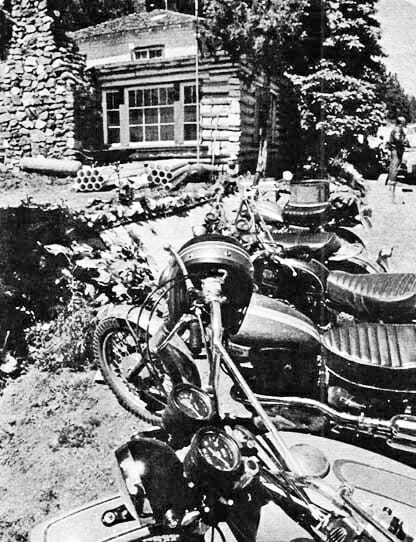 Located along Highway 67, which wanders through the Rampart Range on its way to the South Platte River, the Sprucewood Inn is fast becoming a mecca for trail riders in and around Denver, Colorado. The bar/restaurant is run by George Ehnes and Charlene Homfeld. It is the heart of 264 miles of motorcycle & jeep trails, mostly in the Pike National Forest. These trails are unique, for they are being opened,. instead of closed.

“They say we spoil the bike riders,” blurts Charlene, “but they spoil us.” She talks freely as she takes orders, answers the phone and jokes with customers. “You know why I like bike riders?” she asks. “Because they aren’t drunks. I would rather have 200 bike riders here than one neighborhood drunk.” Some of the neighbors don’t agree. “I don’t think you can discriminate against bike riders any more than you can against coloreds or longhairs. They are just people who have a hobby, and it happens to be bikes. They are bankers, lawyers, laborers-anyone.”

The situation is two-sided, however, as the bulk of their business comes from the trail riders who frequent the area. On a typical three-day weekend, as many as 500-700 riders pass through Sprucewood. In addition to food and beer, the bar has a counter full of oil, spark plugs, cables and levers.

Out back they sell gas in 1-gal. cans. George hauls the gas to the bar in 55-gal. drums, then parcels it out into cans for sale. A gallon costs 40 cents, less than some service stations. “We think of it as a convenience rather than a way to make money.” says Charlene.

Besides the attraction of the Sprucewood Inn, the area is popular for its abundance of beautiful trails. Complete maps of the area are now available, with all trails marked and posted, thanks mainly to Paul Garrigan, a Denver motorcyclist, and Tom Dix, a U.S. forest ranger. Paul and his friends John Koperski and Bob Lawrence got involved when they volunteered to help Dix reroute and clear a trail. Dix asked if they were interested in mapping all the trails in the area. Being reasonably familiar with the territory, they thought the job could be done in a few weekends. That was June, 1970.

The first day of mapping set the tone of the year to come. In riding down the Rampart Range Road, they found 100 dead-end trails in the first four miles. After their 12-hour day they had mapped 3½ miles of trail, although they rode 120 miles checking out each fork, branch and offshoot of each trail. The trio spent every available weekend and vacation working with chain saws and machetes clearing and rerouting trails, mapping them at the same time. In November, when caught in a blizzard 40 miles from the Sprucewood, the three decided to quit until spring. 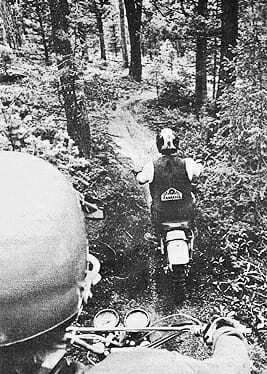 Come spring, Paul found himself riding alone, as his friends had weekend commitments which kept them from helping. By the first part of August, over a year after the project began, Paul finished. His DT-l Yamaha had acquired 8700 miles in the mapping expedition.

Complete, the original maps were given to the government for printing, since there were no current ones available. Because the government maps would not be done for some time, Paul had his own copies printed. These are sold at the Sprucewood and various bike shops in and around Denver.

The result of the project has been amazing. Land owners in the area are no longer so irate. Complaints have been reduced 90 percent says Tom Dix, and the trails are being used constantly by riders. Any trail causing problems with private land owners nearby is either closed or rerouted. The same applies to any trail that becomes endangered by heavy traffic or erosion, thus avoiding permanent damage to the area. One side benefit is that rescuing lost or injured persons, even fighting forest fire, is made easier, because rapid access to the area is made much easier. 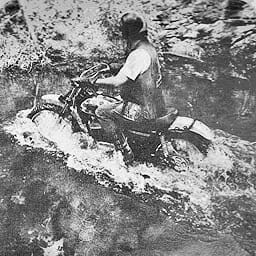 The well marked and mapped trails are the main reason for the area’s success, but the Sprucewood has given tangible meaning to the word camaraderie. Inside, riders sit in sweaty groups, washing the dirt and grit from their throats with cold beer while recounting the heroics of their ride. Charlene’s laugh nearly drowns out the blaring jukebox as she serves another customer. Tired and weary, riders come and go in endless procession. One more trail to ride before loading up. Perhaps paradise has not really been lost, just relocated in the Rampart Range in Colorado.