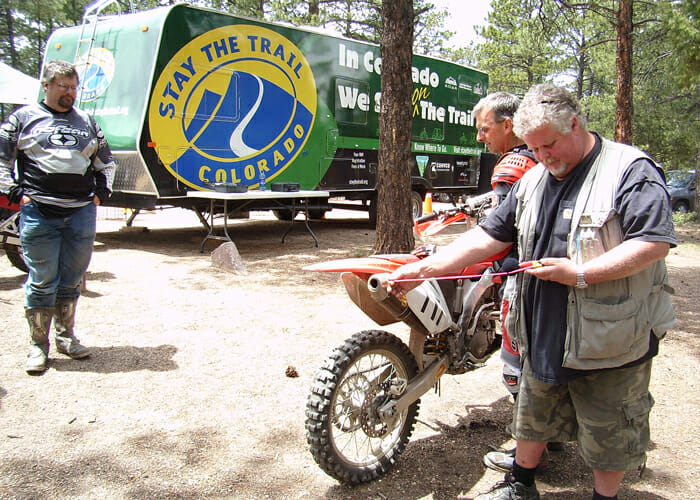 One of the biggest obstacles to off road motorcycling today is sound. Plain and simple, the general public doesn’t like to hear us. Even off-road enthusiasts can get annoyed at the sound of a loud bike. How do you think local landowners feel when they have to hear the constant drone of dirt bikes – even when they are miles away!

The environmental extremists can say all they want about resource damage, erosion, wildlife habitats, you name it, and most can be dealt with in a reasonable manner. But the one thing we can’t argue about is noise. If dirt bikes were silent, the general public probably wouldn’t even know (or care) that we exist. We would undoubtedly have much less resistance to riding in a much broader range of areas.

But we aren’t silent, and many riders compound the problem by putting aftermarket pipes on their bikes that increase noise levels even more. If you read the reviews, you’ve probably looked at the tests for exhaust systems. Have you ever paid attention to the sound levels in those tests? Some of them are outrageous! Now look at the horsepower ratings…not much difference from the highest to the lowest. Maybe a 1 or 2 horsepower difference…and the strongest pipe isn’t necessarily the loudest.

If you’re a top-level rider in closed-course competition, maybe that miniscule gain might help you a little if the competition is so close that every millisecond counts…but out in the woods, even with an experienced rider, you probably won’t even notice.

There are no races held at Rampart. Minor horsepower gains are not worth the cost in noise and potentially losing our riding areas. The only benefit will be to the opposition that wants to shut us down.

Many states as well as the AMA are adopting a noise limit of 96db. If you don’t think your bike can meet this limit, you may want to consider adding a silencer. As of July 1, 2010, the 96db limit is now enforceable in Colorado and you may receive a ticket if you are over. The RRMMC in conjunction with the Forest Service now conducts voluntary sound checks at the Poker Run events so riders can find out of they are in compliance. In addition, free sound testing is offered at any of the Stay The Trail traveling exhibits.