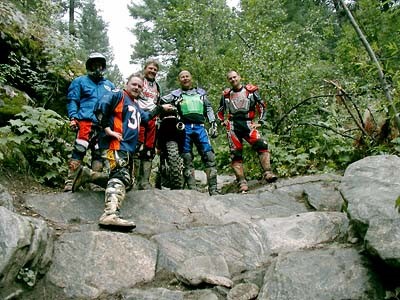 Story and photos by Derek Turner 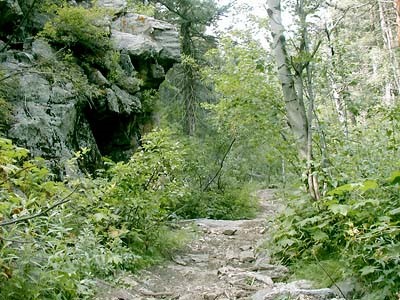 Note: Derek admits that this story is a great example of why it’s always a good idea to ride with a buddy. He was lucky and got out unharmed, but the situation could have gotten a lot worse had an injury, severe weather, or wild animals been involved. Some of the trails are quite remote and see very little traffic – especially during the week. We appreciate him sharing his experience with us all. -RRMMC

Arrived from Amarillo, Texas on Monday evening, September 1st, 2003 for a 2 day ride of Rampart. Tuesday morning rolled in with beautiful weather. Hit the trails about 9am and quickly was reminded why I like that place so much. Riding Rampart is better than any roller coaster I’ve ever been on and what’s more, I’m the one in control. Started out on the easy trails, 682 and such, to get my Rampart groove going. I found myself laughing out loud as I rode those sweeping, up and down, banked trails.

About 2pm I decided it was time for lunch and rode over to Sprucewood via 673 for a burger. After lunch I rode to the Platte river via Russell Gulch. On the way back, I opted to take 692 for as far I felt comfortable with. I couldn’t remember what you guys said was the best way to ride that trail, clockwise or counter-clockwise. So I went counter-clockwise. The route in, I took the creek instead of the ridge. No problems. A little farther down the trail is where it starts getting technical. 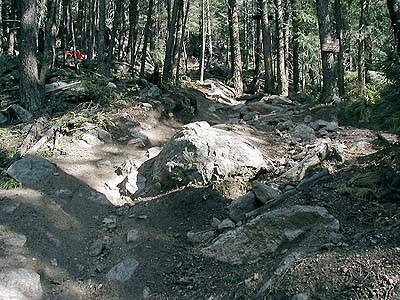 As you move farther up the trail, the obstacles get tougher.

As I come to each obstacle I determine whether I think I can make it back the opposite direction if I have to, before going thru it. I came to a section that was a succession of 3 good size rocky steps/ledges that were about as far apart from each other as the wheelbase of your bike. Inspecting the line that existed from other traffic, it looked absolutely do-able from the opposite direction. I did something similar in Moab just a month before.

So I went down it and pressed on to the next obstacle, a hard left to a deep rutted climb that culminated in a root ledge with a tree right there. That took 2 tries to clear. Then came a couple of sharp uphill switchbacks with huge roots. Cleared those. Then came an uphill climb to try to get over what looked like a bunch of huge, sharp, jagged edged molars buried in the ground. I tried it once and laid it over near the top, almost losing it over the drop-off to the side. 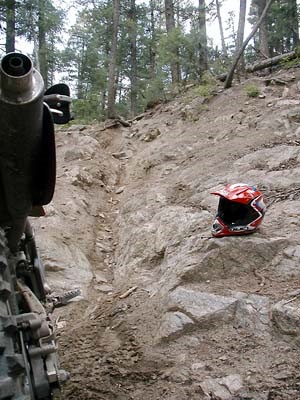 Nah, I thought, that’s all she wrote. I’m turning around right here. It’s starting to get late and I need to get out of there. This was about 6pm. Man, where did the time go? I must have spent close to a half hour each on some of the more difficult obstacles.

On the way out, a short afternoon light rain came thru and wet the rocks just enough to make them slick, something I had not considered. I get to that 3 step ledges and hit the line I saw earlier and I wash out on the slick rock faces and lay it over. I pick the bike up and try hitting it again at different angles trying to get up it, but each time losing traction on the slick, wet rock and laying it over. I was dead dog tired by now, and low on water after sucking it down all day. It was dark-thirty by now and thought I had enough strength for one more try. Hitting it in the light that only my headlight provided, I thought, maybe not being able to see it so well will help me get up it by just “bulldoggin it” and goin’ for broke. 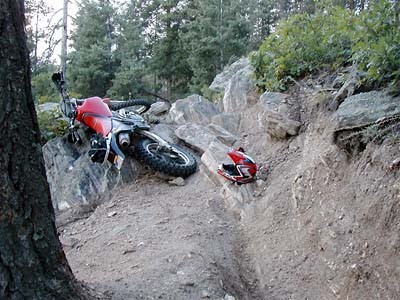 Enough is enough. This is as far as I go.

I get it as high as the front wheel over the 2nd ledge from the top and knew I was done. At least it came to rest in a decent upright position. Didn’t figure I’d get it any farther than that, so that’s where I left it. Now what to do?

It was looking like spending the night in the forest was an idea I had better start coming to grips with.

Taking stock of my situation, knowing how much water I had left, which was only a few ounces, considering how far it was to hike out to Sprucewood by trail, I took out a large garbage bag that I had in my backpack for use as a makeshift rain slicker and huddled inside it, under a tree, for a few hours of rest. 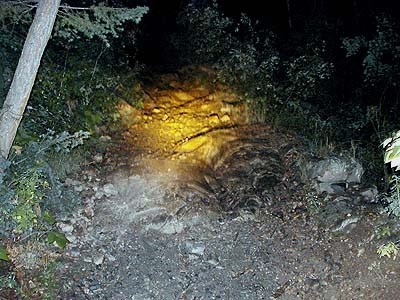 Nothing like wet, slippery rocks by the light of a headlamp.

During this time, I’m going thru my mind on what gear I’m gonna leave with the bike. I decided to leave my helmet, elbow guards and boots. My boots because, I’ve hiked in them before (Alpinestars Tech 8’s). They’re heavy and given my tired condition and the trail conditions and distance I’ll have to hike, I need my legs as light as possible. That leaves just the Tech 8 booties and my socks between me and the ground. But, fortunately I had put in a pair of gel insoles a while back. I was hoping they would make all the difference.

At about 11pm I get up and decide to hike out as far as possible in the dark, having a mental picture of the trail map. After about 2 hours, I made it a little past where the ridge trail and the creek trail meet near the bottom, and lost the trail. I knew it must be right in front of me but I couldn’t find it. 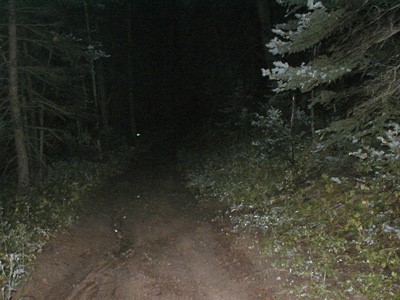 No flashlight, the only way to see the trail is by “flash” light. Hey, is that a pair of eyes peeking back from behind that tree?

With no moon and only the stars and Mars to see by, I took out my digital camera and snapped a picture with flash, then checked the result on the built in screen. I found the trail but soon lost it again. It was now about 1am Wednesday morning. It was then I decided to go off trail a few yards and huddle under a tree, inside my bag til sun up. It rained a few more times and it got cold enough to produce the shivers as I tried to stay warm, wearing only a T shirt under my chest protector and backpack.

There sure are a lot of strange sounds out there at night. Got some rest but not much sleep, as my ears were in overdrive. 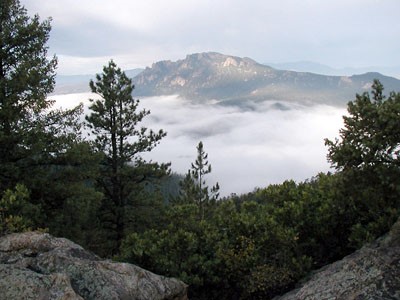 Despite everything, it was a beautiful morning. The scenery is unbelievable.

Got up when it was light enough to see the trail, about 6am, and headed out again. About an hour later I ran completely out of water and was relegated to sipping the water droplets off tree leaves to stay hydrated. As long as it took to get off 692 to where it meets Russell Gulch trail, I thought trekking the rest of the way to Sprucewood was gonna take a long time. A little after 10am I heard car tires on pavement and knew I was close.

Got to the Sprucewood Inn shortly thereafter but she wasn’t open yet. There were 5 riders visiting from Iowa in the parking lot that were about to leave and asked me what I was up too. Thru an almost non-existent voice, I told them the ordeal I’d just been thru and of my plans to try to find someone with a 4 wheeler to take me back in there and help me lift the bike over that last section of rock. First though, I wanted to hitch a ride over to Rampart road and FR507 where I was camped to get a change of dry clothes, socks, water, food, and some rest. The Iowan(sp?) riders weren’t sure what they could do, if anything, after all, it sounded like I had everything scoped out. They wished me well and took off back up 673. 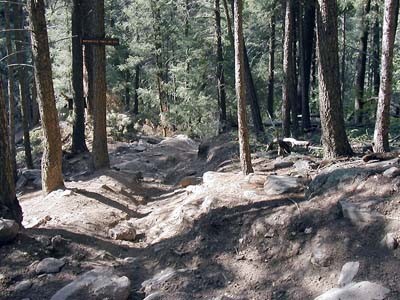 This is where the trail starts to get tricky on the way in. The sign you can’t see behind the trees says “experts only”. Believe it.

I went into the Sprucewood and the lady gave me 2 cups of ice water, which I promptly downed, then let me fill up my water bladder in my pack. I sat there on a barstool resting for a little while then got up to head out to thumb a ride. I just start to walk down 67 and here come these same 5 Iowans back down 673 and they stop me, saying they came back for me. Said they had gotten part way down the trail and stopped to discuss how their conscience was getting the better of them. They offered to either have me ride 2 up with one of them and show them the way back to my bike and help me get it out or one of them would ride 2 up with another and ride my bike out for me.
Wasn’t exactly how I planned it but I wasn’t about to turn them down. We decided it would be better for me to go back with them since I knew exactly where the bike was.

The rescue party makes quick work of getting the bike to the top.

I hopped on the back of a CR250 with a guy by the name of Richard and quickly realized just how good a rider you must have to be to control any kind of bike, riding 2 up, in that kind of terrain. I only got off when we got to the real technical stuff like climbing Bear Mountain. We arrived at my bike in what seemed no time, compared to hiking it. I proceeded to put my boots back on as these 5 guys spent all of 5 seconds wrangling my bike up that last few rock faces.

Then the ribbing started, with things like, “What’s the big deal? You couldn’t do that?” We all laughed. Got some pictures then mounted up and headed out of there. I biffed on one of the last rocky obstacles out, mainly because I was still pretty beat and I have a tendency to try to bulldog my way thru an obstacle when I’m tired instead of finessing my way thru it.

We got back to Bear Mountain and took a group shot. When we made it back to Sprucewood, I looked at my odometer, 10 miles from where I was stuck to the Inn. I offered to buy the guys lunch or something but they just wanted some ice water then to get back on the trails. 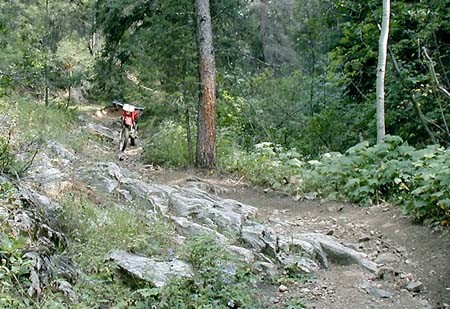 One last look. It is a beautiful section of trail.

I finished off a hamburger then headed back to camp via 673. I got cleaned up, dry clothes and was in the sack by 5pm. Got up Thursday morn, broke camp and headed for home. I didn’t get to ride all the trails I wanted to but I consider any trip you make it back home from in 1 piece and your motorcycle intact, a good one.

I want to thank 5 of my best new riding buds for helping me out of a “slick” spot. Three of them work at the Midwest Performance Honda dealership in Keokuk, Iowa.